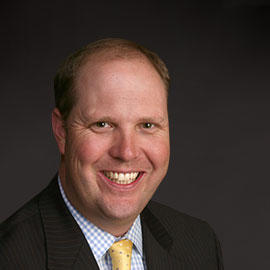 Garrett A. McKnight is Senior Vice President and Managing Director of Private Client Advisory for the Phoenix office of The Northern Trust Company. In this role, Garrett oversees a team of professionals that serve successful individuals, their families and businesses with goals-based and customized solutions in the areas of banking, lending, investment management along with fiduciary management.

Prior to joining Northern Trust in 2008, Garrett was Vice President and Managing Director of the Private Client Group at U.S. Bank in Phoenix, beginning in 2004. From 2000 to 2004, he served as an Assistant Vice President and Relationship Manager at U.S. Bank's Private Client Group office in Madison, Wisconsin. Before joining U.S. Bank, he served in a variety of roles at NationsBank/Bank of America in Virginia and Texas.

Garrett currently serves on the Board of the Banner Health Foundation and is a member of the Men's Arts Council. Previously, he served on the board of Audubon Arizona and was a Trustee of the Phoenix Art Museum. He is also the Past President of the Men’s Arts Council at the Phoenix Art Museum and past member of the Elon University National Alumni Executive Board. In 2017, he received the Distinguished Service Award from Elon.